We appreciate your time in stopping by to visit our Frisco Bounce House Rental Page. Let's Jump Party rentals has been providing the Frisco area and its surrounding communities since 2005, and we're looking forward to helping soon with your next event. Here you will find a large selection of bounce house rentals, water slide rentals & dunk tanks, even tents, tables & chairs for when you need a little outdoor space.

For your convenience, we also provide 24 hour online rental reservations. Just click the link at the bottom of the page and select your event dates and times or browse our party rental inventory to find everything you need. We're sure you'll find a lot of fun stuff to choose from. Our inflatable rentals are set for 6 hours of bouncing fun, want the inflatables a little longer pay an extra $15 per hour or keep it over night for an additional $20. Our tables, chairs and tents are set up for weekly pricing. Choose from water slide rentals, bounce houses combo bounce houses, obstacle courses and other skill challenges, to midway style carnival games, Let's Jump Party rentals has everything you need for a successful event.

With our online reservations system, booking your party rental is as easy as One, Two Three! Just click the "Start Here" button below and enter the date and time of your event. Then as you browse through our website, you will be presented with all the items available on your selected date. Let's Jump can deliver Large and small events to all of the Frisco area.

As you find the perfect bounce house for your celebration, just click the "Add to Cart" button located on every page. When you're finished, you just proceed through the check out process. It's that easy! Let's get your party started now! Let Frisco Bounce Houses deliver the fun to your next event.
Start Here
Travel fees for the Frisco area are $21-$28 based on your Frisco zip code.
Having a party at one of Frisco's 49 parks. Frisco Bounce Houses can deliver. Frisco Bounce Houses offer generators starting at $79 if the Frisco park does not have power.
Let's Jump Rentals can also add the City of Frisco to our insurance policy if Frisco requires it. 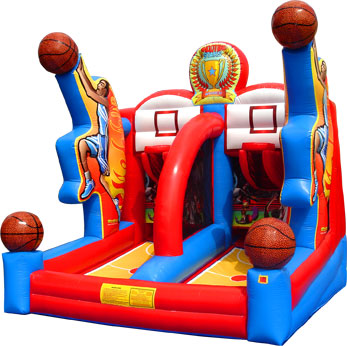 Players must score all their colored balls on the opponents side within 30 seconds to win. The action heats up when you have to clear your opponents balls, and canâ�™t shoot your own. Truly like real NBA full court press action, this game is fast and frenzied, and lots of fun. Can be quickly converted to standard basketball shots for single action play. For your next Frisco Party or Event.
Basketball Games BOOK NOW 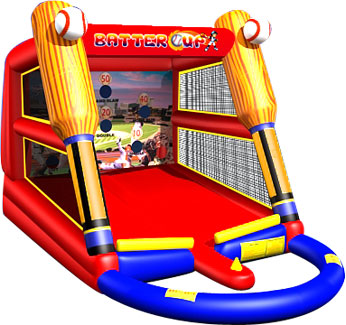 The Batter Up lets your guests feel like they are in the big leagues, with this baseball-themed inflatable game. Players can step up to the plate and take part in batting practice as they hit baseballs into an enclosed "outfield." The back wall has strategic holes, with designated 10-point values for each hit, amid realistic artwork, complete with defensive outfielders trying to catch the ball. The Batter Up inflatable game offers plenty of three-dimensional details, with a baseball bat- and ball-flanked opening and versatility; players can bat either left- or right-handed.
Batter Up BOOK NOW 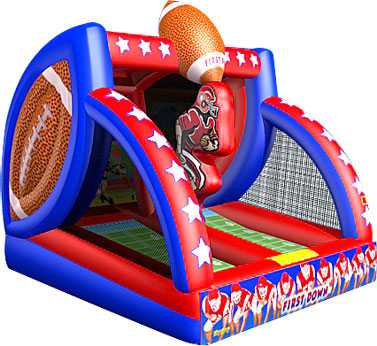 This game features two ways to play. One way is to utilize the crossover system and play QB Blitiz where two players rush to get rid of all their footballs before the other. The second way is to remove the crossover ball return system, and play 2:00 Minute Drill where one player must score as many touchdowns as possible in 2 minutes by driving the field starting at their 40 yard line, 10 yards equals a first down and 60 yards equals a touchdown, fail to complete either in 4 downs and your forced to punt the ball away and your game is over.
Football Games BOOK NOW With over 150 inflatables and games Let's Jump offers Frisco customers one of the largest inflatable selections in the Dallas Fort Worth Area. Thanks for stopping by Frisco Bounce Houses and we hope to see you soon. Don't see something your looking for please call Let's Jump rentals serving the Frisco area since 2005. 800-697-7156

Bounce House Combo
Single Lane Slide
Basketball Hoop
Can be used wet or dry
Book Now
Frisco bounce house offer over 150 inflatables and games. Use the search bar below to search through one of the largest bounce house inflatable inventories in Frisco and Texas.
Powered by EventRentalSystems